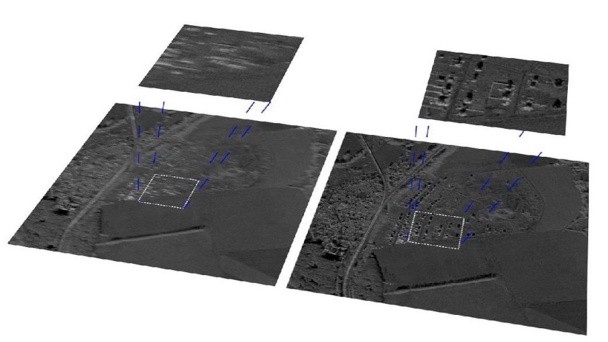 Synthetic aperture radar (SAR) systems are very popular instrument for high-resolution image of ground surface. Unlike to optical systems, SAR can be used in all weather and lighting conditions.

A basic idea of SAR technique is coherent processing of received signals on a moving platform (aircraft or satellite). The main challenge is to perform very precise measurements of platform position at each moment of time.

Due to limited precision of modern navigation systems some uncompensated deviations are still exist. Thus, the compensation of residual errors is still an open question. 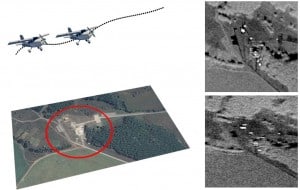 Our work was related with development of technique for the estimation and compensation of residual platform deviations.

The idea of the proposed autofocus technique is related with usage of local estimates for an arbitrary phase error reconstruction (Fig. 2)

According to developed approach, a pair of SAR images is formed on a short-time interval. At the next step a local-quadratic phase error is estimated. Specifically developed procedure allows to use a time-series of local estimates for the reconstruction of an arbitrary residual SAR platform deviations.

Finally, Fig. 3 contains a block-scheme of our autofocusing method: 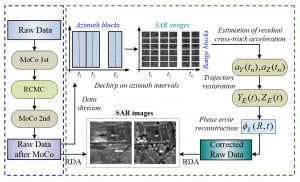 More details about autofocusing algorithm can be found in our publications in the research page.

Finally, Fig. 4 contains the animated gif file illustrating the result of application of our method.

Obviously that the quality is much better after autofocusing. We have presented the result of developed approach on a large number of international conferences and it has proven to be an efficient tool which could be used in modern radar systems for high-resolution imaging.